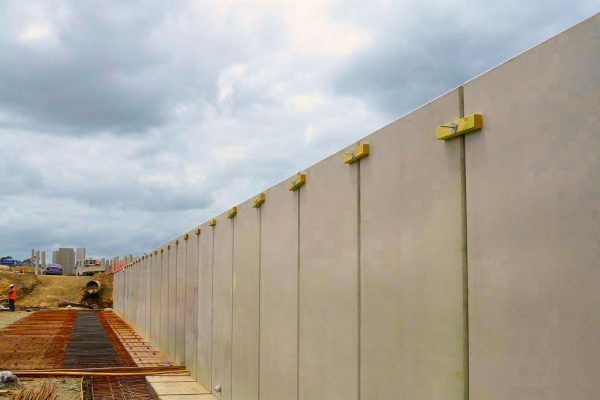 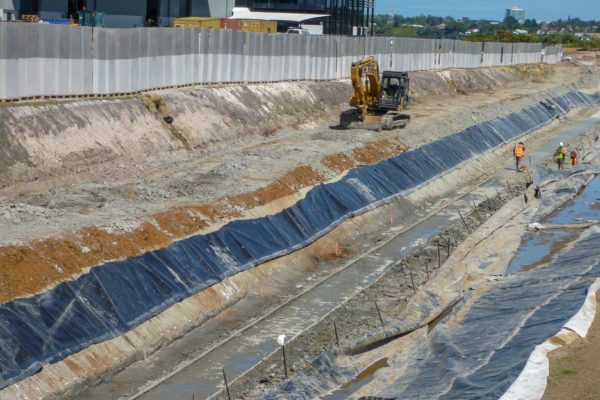 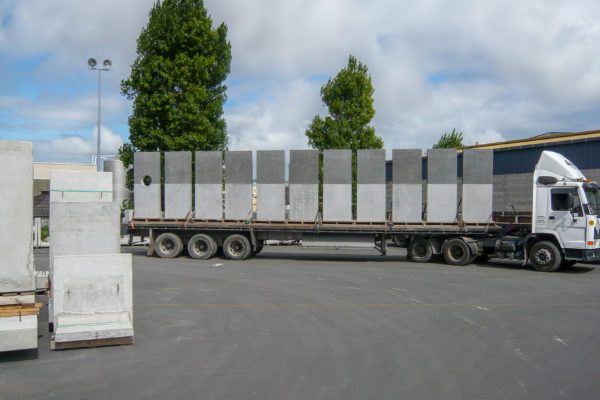 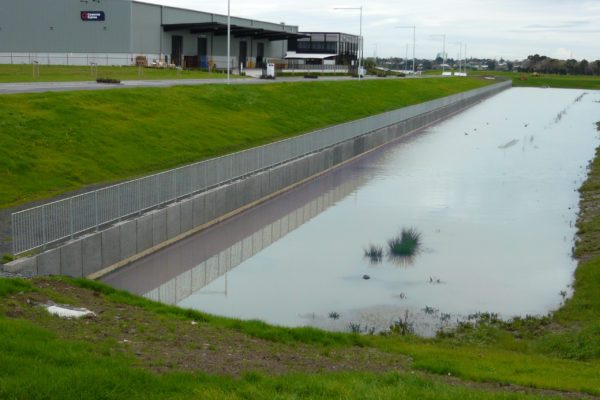 After the success of Hynds Lusit system in solving a stormwater pond retaining issue at the Highbrook Industrial Park, Leighton Works approached Hynds to determine whether they could provide a cost effective solution to retain the Plunket Avenue Stormwater ponds.

These ponds were part of the stormwater management plan for the $260 million SH20 Manukau Extension project in Auckland.

The Plunket Ave stormwater ponds had to be located in a relatively narrow section of the SH20 extension, with occupied industrial land on one side, and the SH20 motorway on the other side. Site constraints meant it was not possible to construct the ponds in the conventional manner using battered earth and contoured slopes.

The design engineers had originally planned to use a system of sheet-piles to form retaining to the long sides of the ponds, with a 500mm clay base liner and earth sloped ends. However the client, surrounding land owners and Leighton Works were after a more cost effective and aesthetically pleasing solution.

Leighton Works were initially interested in using the Hynds Lusit Angle Support System because of the attractive design and vertical retaining solution that the system offers. LAS Elements can also be designed to handle specific load surcharges. In addition, the LAS Elements would enable the stormwater ponds to be located directly on the boundary between the SH20 corridor and the surrounding industrial land.

The standard Hynds Lusit Angle Support system has been designed to normally work with approximately 75% of the typical soil types encountered within New Zealand. However the geotechnical soil analysis in the proposed stormwater ponds location indicated some of the “weakest” soils the system had yet encountered, with modulus of elasticity as low as 2 MPa.

In conjunction with Leighton Works, and the geotecnical engineers (Tonkin & Taylor), an initial re-design was proposed, involving a series of 8m deep colmix columns. This would provide enhanced bearing capacity and improve the global stability along with installing 3m+ high Reverse LAS Elements along both sides of the stormwater ponds.